Comparative aspects of tryptophan metabolism and its effects on agonistic behaviors. 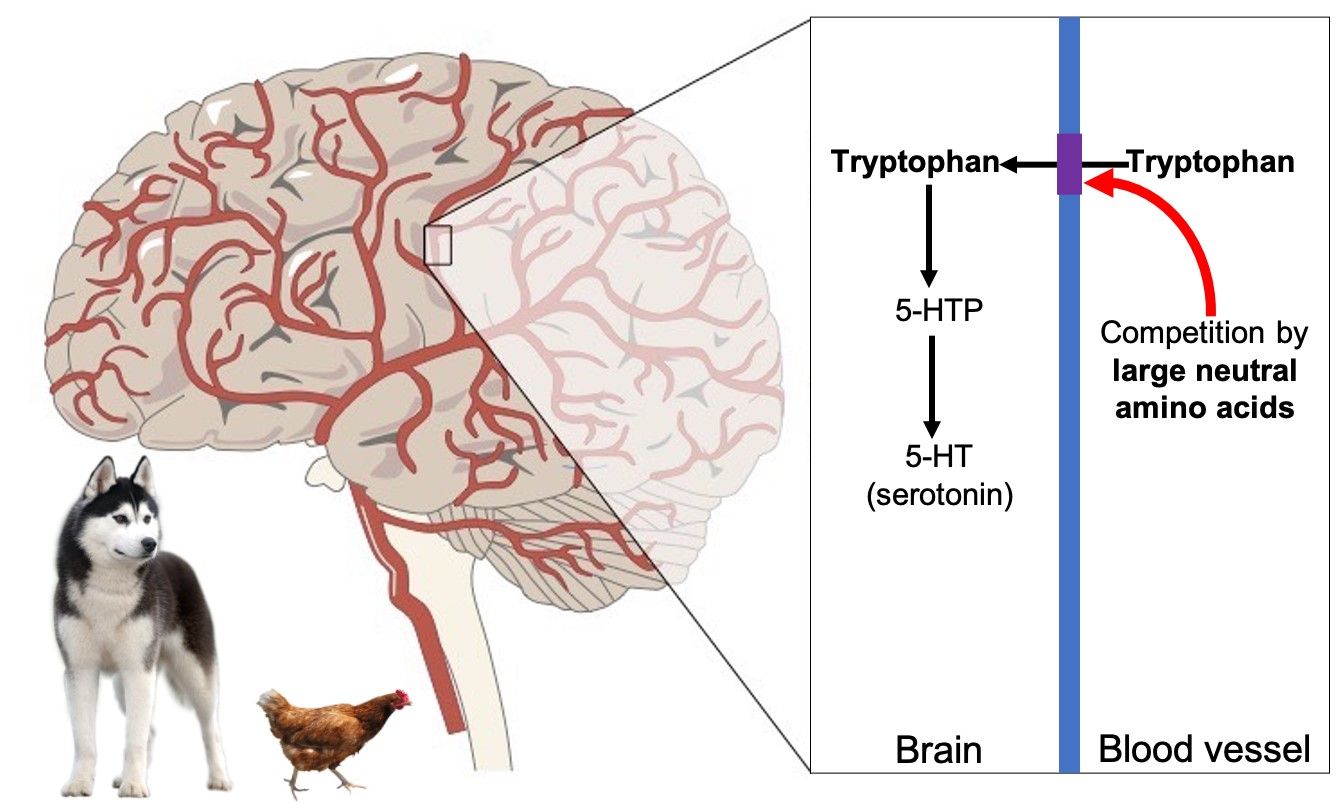 Tryptophan (TRP) is a dietarily indispensable amino acid in mammals and avian species. In addition to its essential role in protein synthesis, TRP is the precursor of numerous secondary metabolic pathways. The predominant catabolic pathway in most tissues is the kynurenine (KYN) pathway where upwards of 95% of TRP is metabolized into KYN. The KYN pathway further contributes to the synthesis of other neuroactive metabolites such as kynurenic acid, quinolinic acid, and NAD/NADP (Stone & Darlington, 2002; Fernstrom, 2013). However, TRP is also the sole precursor of serotonin, a neurotransmitter involved in the control of numerous central and enteric nervous system functions including mood, aggression, anxiety, and motor behaviors (Sandyk, 1992). However, TRP competes with the large-neutral-amino-acids (LNAA) for access to blood brain barrier transporters, which have the potential to limit the amount of central serotonin that can be synthesized (Fernstrom, 2013).

In agricultural species as well as in companion animals, TRP has been shown to influence anxiety, stress and aggression related behaviors (Reisner et al. 1996; Kato et al. 2012; Birkl et al., 2019). Agricultural environments can be challenging for production poultry, which are re-housed in large groups with unknown conspecifics numerous times throughout their lives. Similarly, working and performance dogs are regularly exposed to a multitude of factors, such as rigorous exercise regimens, changing environments, and diet shifts, which can negatively affect their physical and mental wellbeing. These stressors all have the potential to trigger agonistic and undesirable behaviors, such as aggression in dogs and feather-pecking in laying hens, both of which negatively impact the animal’s performance, health, and welfare. In an attempt to understand, alleviate, and/or prevent these behaviors, nutritional interventions, such as supplementation of TRP in excess of its dietary requirement or supplementation of specific bacteria able to modulate TRP metabolism, have been explored as a means to increase peripheral TRP and central serotonin.