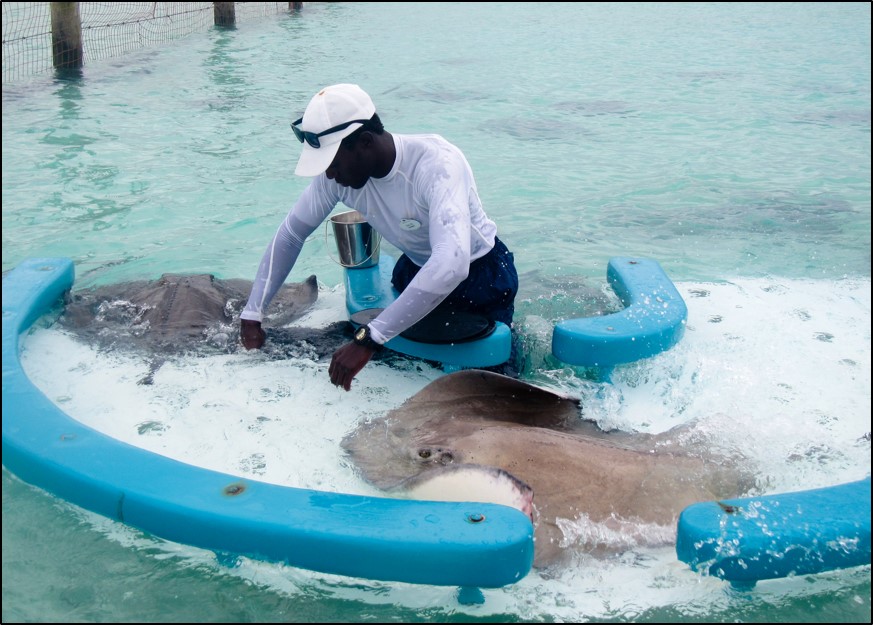 The Walt Disney Company manages two distinct populations of female southern stingrays (Dasyatis americana) at The Seas, Orlando, FL, and at Castaway Cay, Bahamas. Stingrays are housed in artificial (Orlando) or natural (Bahamas) seawater.  We previously reported significant differences between these two populations based on eight years of routinely collected serum data.1 The aim of this study was to assess whether removal of dietary supplementation impacts serum nutrients, hypothesizing reduced managed animal serum concentrations, comparable to wild cohorts.  In order to better understand our supplementation regimen, we removed daily vitamin supplementation (Mazuri Shark/Ray-low cobalt, 5M1Y) from the diets of The Seas population. After 13 months, we observed reductions in total serum iodine, cobalt, copper, and manganese concentrations (p < 0.05) in unsupplemented rays (n = 11) compared to control (n = 36).  Wild population samples (n=14, female) were collected in partnership with the Bimini Biological Field Station, Bimini, Bahamas.  Compared to the wild samples, The Seas rays without supplementation had no significant difference in serum total and inorganic iodine (p > 0.08, and p > 0.5 respectively). Although serum manganese remained numerically greater in The Seas rays (10.6 vs 3.65 ng/kg), this was not significant (p = 0.17) due to high standard deviation for the sample size.   Cobalt (p < 0.001) and copper (p < 0.05) both remained significantly higher in The Seas population versus wild rays.  These findings suggest the current level of recommended supplementation may not be necessary in managed southern stingrays, with further research warranted to determine appropriate recommendations.