The Mob – Under Investigation 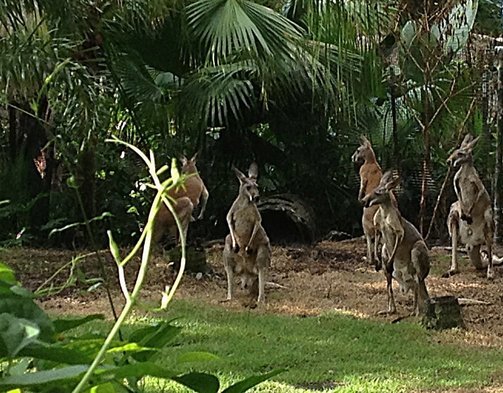 ‘Brewer’, a 4 year old male red kangaroo (Macropus rufus) under human care at Disney’s Animal Kingdom, presented on December 10, 2016 with signs of colic, penile prolapse, and dribbling urine. Diagnostic imaging, including radiographs and computed tomography (CT) with contrast, revealed urethral obstruction with a radiopaque stone and additional uroliths in the left ureter and right renal pelvis. The urethral and ureteral uroliths were surgically removed, and supportive care was provided, including intravenous fluids, antibiotics, and anti-inflammatories. Unfortunately the stone in his kidney could not be removed. ‘Brewer’ recovered well, but on March 31, 2017, he presented again with similar clinical signs indicating acute urethral obstruction. Medical and surgical management was initiated, as previously described. ‘Brewer’ is one of eight red kangaroos cared for at Disney’s Animal Kingdom, so following his second urinary obstruction, presence of urolithiasis was investigated for the entire kangaroo mob. Various factors influence whether uroliths develop in the urinary tract of mammals, but diet can be a major contributor. Understanding which questions are important to ask and how to best obtain the information is key to discerning whether this is an individual clinical case or a herd-health issue.