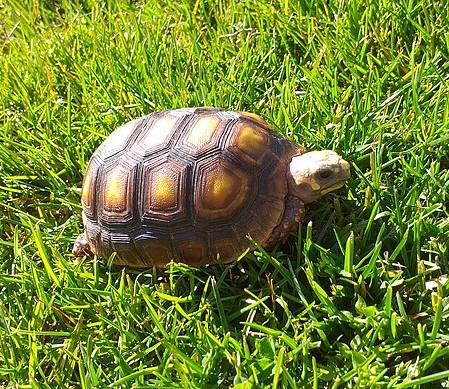 Different allometric exponents have been described for all reptilian taxa (Andrews & Pough, 1985; Chappell & Ellis, 1987; Nagy et al., 1999). However, these can overestimate the daily intake of metabolic energy in some chelonians (Higgins & Edwards 2009). Also, lower allometric exponents have been reported in some reptile species (Zari, 1993: Roe et al., 2005; Jodice et al., 2006). Global climatic changes open energetic challenges to ectothermic animals, including reptiles, which are directly affected by ambient temperature, especially considering early post-hatch life, the most vulnerable phase for survival. The present study aimed to estimate the allometric exponent of the resting metabolic rate (RMR, kJ/day), the daily intake of digestible (DEI, kJ/day), and gross energy (GEI, kJ/day) at 28°C and 18°C in red-footed tortoise (Chelonoidis carbonaria) hatchlings. Ten hatchlings were used, fed with a high fiber diet (39.20% NDF and 19.52 kJ/gDM). The RMR was measured via indirect calorimetry at both temperatures by an open flow respirometry system after 10 days of fasting. The digestible energy was estimated by the apparent digestibility coefficients from a previous study at 30°C and 20°C. Body mass, DEI, GEI, and RMR were log10 transformed, and the influence of body mass was evaluated by a General Linear Model (GLM) to obtain the allometric exponent at each temperature. Significant effect of body mass was identified on GEI, DEI, and RMR at both temperatures (P < 0.01).